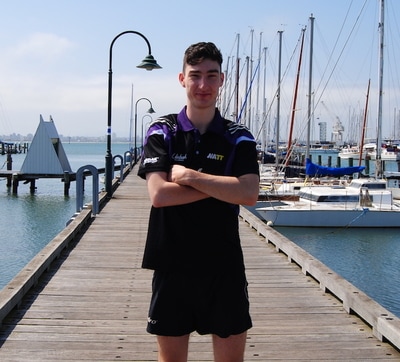 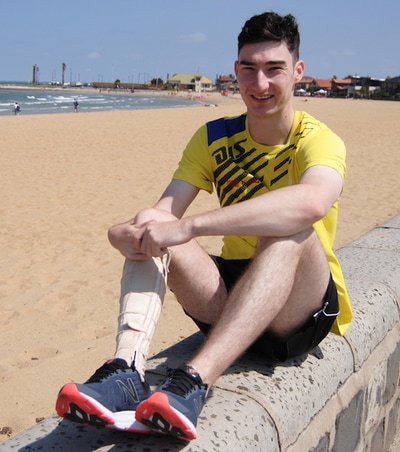 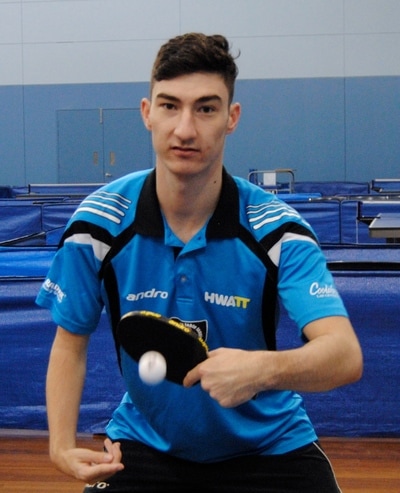 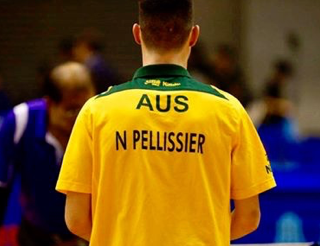 Born in 1996, Nathan has now completed his bachelor of Business Degree and whilst in Australia works part time at Coolabah Law Chambers. He is now taking up new academic challenges and entering into a Master of Accounting. On top of this Nathan has a demanding training schedule, in excess of twenty hours each week. Somehow, he also seems to find time to have fun with his buddies in and around his hometown of Williamstown, Victoria, Australia.

In the last 4 years Nathan has had two hip surgeries and bone grafts. These painful procedures have been brought about because his condition means that the bones and muscles grow painfully at separate rates and impair functioning

​2017 was a massive year for Nathan wining gold at three major international titles including the Oceania Regional Championships in Fiji, the Taiwan Para Open and the Korean Para Open.

2018 Nathan lived and trained in Munich, Germany in his preparations for his seconds singles World Championships. In the lead up to the worlds he was able to pick up a Bronze medal at the Spanish Para Open and a bronze Medal at the USA Para Open. The World Championships in Slovenia was a great learning experience  and has enabled Nathan to focus and drive even harder.

​2019 is the qualifying year for Tokyo 2020 Paralympics sees Nathan busy playing tournaments to secure his spot. From August Nathan will be based in Germany training under Thomas Wetzel within his International Table Tennis Academy
Testimonials:
Alycia Morgan, Physical Education Teacher, Bellbridge Primary School
I am a Physical Education Teacher at Bellbridge Primary School and I have known Nathan Pellissier for my whole life.  Some students at the school were not motivated by physical education and sport and after knowing Nathan’s story I knew that the Grade 5 and 6 students would benefit from hearing about his life.

Nathan spoke at my school on Friday 17th March 2017, after the school assembly for 15 – 20 minutes.  He spoke about his achievements in his Table Tennis Career so far, his ambitions and goals and the struggles he overcame to accomplish these goals.  His speech was thought provoking, engaging, motivating and inspiring for the students, as most had never met a National Champion and had never heard of a story like his.  Nathan told the students to never give up on your goals because if you want it bad enough and work for it you will achieve it (Sport related and otherwise).  Nathan is proof of this.
​
​The students’ favourite part came at the end when a couple of lucky students and even teachers got the chance to play against the Australian National Table Tennis Champion.  It was a great experience for the Grade 5 and 6 students and something they will never forget.  He was great. I look forward to inviting him back for future Grade 5 and 6 students.
Rob Carroll, Founding Director, Maribyrnong Sports Academy
When Nathan won the National Table Tennis Championships recently, no-one was really surprised. Especially those that know him well and have been associated with his journey to this point.

He is an outstanding young man who has been resolute in his pursuit of excellence through sport and his consistent attitude to get the best out of his mind and body.

The staff of Maribyrnong Sports Academy have admired his perseverance, courage and tenacity since he enrolled as an aspiring student athlete in 2011 and his humility, sincerity and graciousness exemplify the very best aspects of what we admire in our sportsmen. He always sets high goals and was the recipient of an SSV School Sports Award (Blues Award) for Table Tennis as well as being inducted onto our Australian Representative Honour Wall.

​We have no doubt that Nathan will leave no stone unturned in his preparation and aspirations to represent Australia at the 2020 Tokyo Olympics.
Jeff Tran, Barrister & Solicitor, Coolabah Law Chambers
When I was in high school I learned the following quote from my years 8, 9 and 12 Mathematics teacher, Mr. Graeme Ganderton: "Persistence and determination alone are omnipotent."

Nathan has both characteristics and more.  He also has talent and is an impressive and ambitious young man.  The above combination together with Nathan's gluttony for work, is dynamite and that is why Nathan is successful and will reach his full potential.
​
But for me, above all else, Nathan is simply a kind, humorous and considerate individual.
Jason Rowe, Joint Dealer Principal, 3 Point Motors | Mercedes-Benz
​Nathan Pellissier is an inspirational young man that has turned what many would consider adversity into opportunity as he chases his dreams in the sport of Table Tennis. Never one to shy away from a challenge Nathan demonstrates amazing dedication to excel in his sport. It is however the combination of his resolve and positive approach to life that sets him apart and brings him success.

​We are proud to support Nathan in reaching his dreams and beyond!
Phil Cartledge, Committee Member, Sunshine and Western Region Sports Club
Mr. Nathan Pellissier is a young man of considerable talent not because as a Para sportsperson he is an Australian champion. The unquestioned reasons are his softly spoken manner, his respect shown to others, his willingness to help and instruct his fellow competitors.

Nathan's strength of character was shown when severely injured and requiring two major surgeries, the second to combat infection he strove with head held high to reach one of his major goals the afore mentioned Australian championship. In my 70 years I have seen many young people with talent but Nathan is special, his comes with a mental strength and an unwavering commitment to task at hand.

​Yes I am an unabashed Nathan fan, meet him and you will be to.
Simon Gerada, Coach, Health Wellness & Table Tennis PTY LTD
​I’m a former Olympian, Australian Champion and had the privilege of being a professional table tennis player being paid to play the game I love for more than ten years travelling all over the world. I do not mention by background for my own promotion, but only as a reminder that I as many that read this article can learn from Nathan. These days I’m a coach and mentor to many kids and champions including Olympians, Paralympian’s and National Champions like Nathan and the best way for you to get a feel for who Nathan is, a taste for his character and what he brings to our environment is a story from a training camp in 2014.

Nathan was on his way back from injury and entered the season determined and ready, the camp was a program which began at 7:30am with a thirty minute sprint versus jog interval, a forty-five minute service session followed by two three hour on table sessions everyday for twenty-one days straight. By day fifteen Nathan had not only not missed a session but had impressed all coaches with his training ethics and fighting spirit, but none more than what had happen during this particular mornings running interval.

By this stage we (coaches) had had several players resting, dropping out from the high performance regime, hurting and some even crying when we turn to see Nathan tumbling along the floor as he fell during a sprint period. Lucky for the team, Nathan was in front and had clear space in front of him, which in it self was impressive as he left the able body athletes meters in his shadow. As Nathan was rolling along the floor, trying to protect himself from injury, we (coaches) moved towards Nathan asking if he was ok and required help he said he was ok. At this point he asked for help to get back to his feet. As we helped, we also expected to move him to the seats to sit and rest when he replied @&%$ off, move! and let me go….

​In summary, whilst we had athletes crying about a sore finger, or in bed having a rest we also had this human being who simply does not give in. Nathan is an example to all of us in everyday life. It has been a pleasure being associated with him. He generates his own luck, he's an investment for every individuals life and continually delivers inspiration, accountability and awareness.
David McConville, Friend and Supporter
​I first became aware of Nathan in September 2014 whilst on tour in China where I met his parents Miranda and Stephen. Miranda and Stephen had just finished touring with the Australian table tennis team at the World Championships in Beijing, China and watched Nathan compete,  then they joined a tour of China with us.

I actually met Nathan in November of that year. The first thing that strikes you about this man is his willingness to engage. The more I spoke with him the more I wanted to know him.

Having come from an athletic background of both competing and coaching, I wished I and people I had coached had half the drive and heart this young man has. If you were to try to describe a superman , you would be describing Nathan.